Get The Portfolio In Shape With Planet Fitness (PLNT)
Greetings investors across the globe! Amidst the latest economic data on jobs and speculation on the FED raising rates I have something different. I have a stock analysis. A couple of days ago Planet Fitness (PLNT) a fitness center went public on the New York Stock Exchange. I know this company well. I am a black card member of Planet Fitness. I've been going to Planet Fitness for about a year now. The thing I like the most about it is I pay $19.99 a month and I can go to any location I want. I go to two different locations that are open 24/7. There is a Planet Fitness a block from my apartment and there is another one near my work! Tomorrow after work I'm going to stop by the one next to work. A couple of days ago I was at the one near my place. The black card is actually the highest tier of membership and it's still only $19.99. The other membership tier is cheaper and is $10. With my membership I get access to the massage chair for free, tanning, 1/2 price cooler drinks and probably a lot of other perks I'm not aware of or won't use. Some clubs have hydromassage, haircuts and 20% off Reebok apparel.

One of the reasons the company has been so successful is it is marketed to the broad population. It's marketed as a welcoming, non-intimidating "judgment free zone." It appeals to people who are just getting started. It's not a typical bodybuilding "gym." "This exceptional value proposition is designed to appeal to a broad population, including occasional gym users and the approximately 80% of the U.S. and Canadian populations over age 14 who are not gym members, particularly those who find the traditional fitness club setting intimidating and expensive." There are no free weight barbells. It doesn't attract the steroid using bro's who need huge plates to squat. They do have plenty of free weights but they are dumbbells. There is a squat rack, smith machine, pull-down cables and plenty of weights. There is also every necessary piece of equipment for whatever your fitness goal. They cover it all. The place is big.

Why Is This A Good Stock?
With the economy doing well people are spending money on all sorts of discretionary industries. I recently heard that Americans are spending more on eating out at than ever before. The government jobs report that came out Friday noted that one of the strongest job growth industries is leisure. So the bottom line is people are spending. I believe they are willing to spend $10 to $20 a month on a gym membership. The growth of Planet Fitness proves this. They have grown from 389 stores in 2010 in 39 states to 918 stores in 47 states, Canada and Puerto Rico for the year end 2014. They are one of the largest and fastest growing fitness centers in the country. If there is a trend toward healthy living fitness centers and gyms will reap the rewards of that trend.

The thing I love about this company is they are growing from franchising.  Everyone knows about the Mcdonald's (MCD) growth story. The way they grew so fast and so profitable was from franchising. Same here. Planet Fitness has had same store sales growth since 2010. Planet Fitness franchised locations are growing same store sales twice as fast as corporate locations! For the year of 2010 franchisee owned locations grew same store sales 14% and corporate owned grew 5.7%. In 2011 they both grew 3%, in 2012 franchise were 8.7% corporate 4.8%,  2013 franchise were 9.1% vs 6.1%, 2014 11.5% vs 5.4% and in the last quarter 2015 franchisee sales almost tripled with 11.7% vs corporate 4.6%.

There have been 33 straight quarters of same store sales growth. Here is the companies growth in pictures. 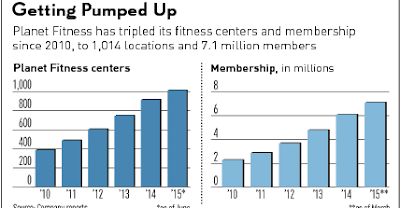 When you invest in a stock you ask, what could go wrong? I don't see the franchising model failing this company. Infact I see it as a major catalyst for serious growth. One thing that could happen is they try to grow to fast which will hurt them. That's a bridge to cross if we get there though. There are roughly 900 locations nationwide and the company sees potential for 4,000 in the US.

Numbers and Valuation
Not only does the company have revenue and earnings growth they generate a lot of free cash flow. Free cash flow in 2013 was $60 million. In 2014 there was $25 million. Free cash flow is great to see in any business. Some have zero! Just how profitable is this company? Net profit margin for the full year 2014 was 13%. This is a good net margin. They are carrying a good bit of debt. They were bought by private equity a couple years ago and I'm not sure if that had something to do with the debt. The balance sheet is fine none the less. The current ratio is .94. I like to see 1.0 or greater for a current ratio but this is close enough.

Now the sexy stuff. Earnings. Earnings from 2013 to 2014 grew 48% from $25 million to $37 million. They can definitely grow. Earnings per share for 2014 was $.24. Off of a stock currently trading at $18 the trailing price to earnings (PE) multiple is 75. This seems expensive, however, if they continue to grow like they have this is a fair price at $18 a share. This is a growth stock. Let's take a more common example of PE valuation. A company grows earnings 10% a year. The PE is 20 and we call that a healthy PE premium for a quality company growing at 10%. The PE for Planet Fitness in that scenario would be close to 100.

I see the floor for the stock price at $12 a share. At $12 a share it is trading at a multiple equal to its earnings growth. A 50 PE or the growth rate puts us at $12 a share. Growth stocks are great because there is often multiple expansion as more people want to be a part of fast revenue and earnings growth. The downside with them is if the multiple gets to far ahead of real growth the stock is priced for disappointment on any negative news. This stock has a long way to go before it gets to that point. I see a lot of potential for share price growth with Planet Fitness over coming years.