I've made a couple posts on SORL Auto Parts over the past couple of years. Nothing has changed much with the companies long-term fundamentals. The only thing that has changed significantly is the stock price. It's net current asset value has actually increased from 2013 when it was $124 million and 2014's of $129 million. Right now $141.7 is the net current asset value of SORL. It still sells brakes and auto parts in China. It's a major player in commercial brakes. What I didn't realize about SORL before is how diversified it is internationally. 73% of its business is in China but 27% is international in 104 countries including the United States, UAE and Europe. I'm always skeptical of Chinese companies so I looked around to see if I could find info on where they are sold in the US. I didn't see anything which likely is because they are sold directly wholesale to big companies with commercial trucks. I did find some parts on Alibaba.

The stock is cheaper relative to NCAV than in 2013 with the market cap back at $50 million, NCAV at $141 million and the stock at 2.72. It is priced at 36% of net current asset value. I do believe this would even meet Benjamin Graham's margin of safety requirement! Sales have grown steadily every year since atleast as far back as 2012. Yet the current price to sales multiple is .23. Below 1 is low for about any decent company. The company is profitable yet the PE ratio is 3. On the balance sheet the current ratio is 3.6. Healthy. A cool $18 million in free cash flow in 2014.

I'm very bullish on China over the long-term and I would expect this correction currently going on in the overall China market to end sooner than later. The current PE multiple on the stocks in FXI is around 10-11. If you can get major Chinese companies for single digit PE's that is cheap. Not to mention some dividend yield too. SORL has a lot of support until 2.50. I think the fundamentals make it a compelling buy here. 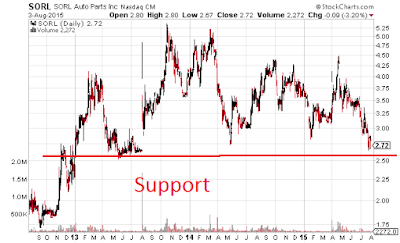