What Happened To The Green Shoots? 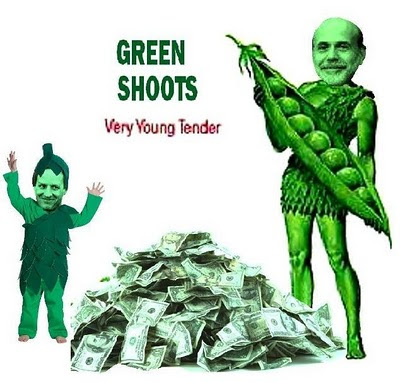 Is it actually possible that the green shoots were merely the result of short-term stimulus and inventory shifts by companies? Is it possible that the trajectory of GDP could go sideways or fall for years or even a decade or two after a serious unprecedented structural shift in the economy?

Bernanke said today many times that the current budget deficit is unsustainable. He also said that deficits of over 3% of GDP are unsustainable over time. These two facts would be troubling but lawmakers and the FED believe they are temporary because solid economic growth will shortly return.

All scenarios revolve around the premise of a solid recovery returning. It has to because we are facing a falling tax base and baby boomers retiring. I'm afraid a stagnant economy like Japan in the 1990s will not even be considered by lawmakers when it comes to spending programs and balancing the budget. But I guess why would it? The U.S. has produced one of the greatest economic track records ever in history. Even more rare and impressive about it is the history of economics on the whole when it comes to other countries is often a very dismal one.

Whether or not things get under control shorting treasury bonds and the dollar should be a good long-term macro play. Of course it is difficult here with the potential for at any time a panic rush to dollars but if there continues to be a flock that creates a mini bubble shorting the dollar seems like a no brainer because at the least it will fall from debasing.

Some articles and videos I have come across recently

Deathbed of Keynesian Economics Will Be in U.K.