Last week the high beta stuff was back in play. The rare earth elements and metals. Oh, and don't forget the shippers. If I've been right about anything lately it was that the shippers had bottomed. DRYS is very correlated with the index. It's a good one. One of the stocks I've had my eyes on lately is former net-net Infosonics IFON. The stock is usually very thin but a few days ago I noticed it was in-play as the volatility and volume suddenly appeared. So it's no longer in net current asset territory, however, it's moving lately. They got a notice of failure to maintain the Nasdaq'a minimum price per share above $1. Other than that I don't know of any significant news around the time the surge began. 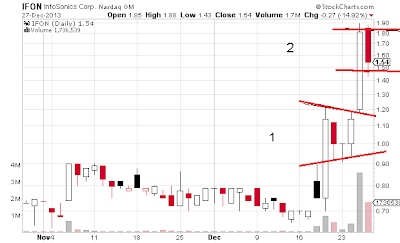 Another flag is starting as it consolidates from that huge run the other day.
ENG is consolidating and this looks like a long flag here. The stock is up so much over the last 6 months that it seems like buying would be chasing. This is just such a perfect flag here that any break above it could get some good follow though I would imagine. We'll see though. ENG has a nice balance sheet. 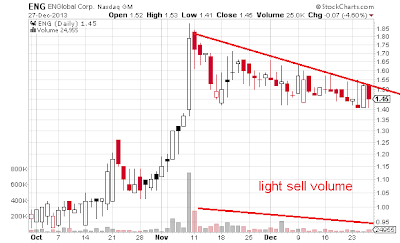 Tasman Metals TAS is a junior resource company engaged in the acquisition and exploration of rare earth elements and tungsten in Scandinavia. TAS has a great chart going. It's in a nice slow uptrend and just tested trend support and held on volume. This is going higher. Over 1.10 soon. 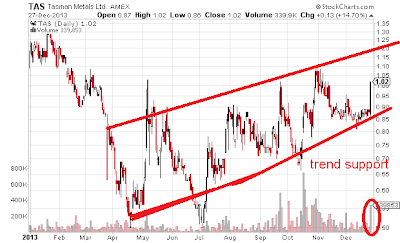