I was looking through some scans and this chart stuck out. I drew the resistance line for the range it has been in. 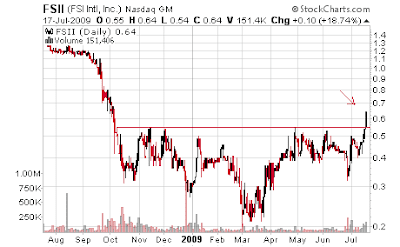 This breakout looked interesting so I checked out some fundamentals. The stock happened to be a net-net. I think it actually rings a bell as a perennial net even though I don't scan for net current asset stocks as often as I used to. Unfortunately, it is a semi and I hate the history of its fundamentals. The fact that someone is buying this here on more than its average volume and taking it up is interesting. I'm thinking that someone may be coming in late? I've noticed some micro-caps like PXG would get accumulated after the bigger companies in the sector all got rotated into. I guess that would make sense because naturally the street is going to go after the Microsoft's first because of the liquidity then when that is exhausted and they still have money to put to work the only place left is smaller market caps.

Hard to find much good going on here. This is possibly better. "The Company intends to manage its operations with a goal to end fiscal 2009 with greater than $10 million in cash, restricted cash, cash equivalents and marketable securities." There is no long-term debt but there has been declining revenue growth and income for years.

Not very excited with the little info I have on the company fundamentally. Just watching this one right now. This isn't a good stock to invest in surely. To trade. Possbily. The technicals point to more potential upside with this rounding bottom and breakout if it holds another day or so. I've been up as much as 6% or so so far in net-net IFON. So far the stock is holding up well.