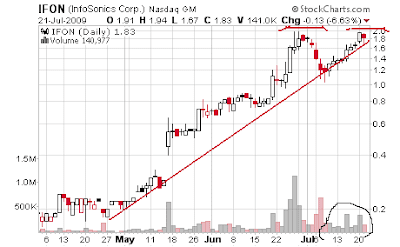 I'm glad I learned technical analysis because it really helped me out with IFON. Actually, the way it is going right now it may have been the difference between a nice gain and tiny profit or loss. I used that red trend line(in my platform though) to see that the bull run was still alive after it had fallen back to $1 and slowly started creeping up around the same trend line. After I longed it at $1.58 all I did was watch it continue up the line. As it approached the $1.99 resistance from the other week(first red line) without breaking it strong intraday I saw the potential for a double top and pull-back. Not worth the risk of loosing the profits because of that possibility so far into this run it has had. I actually sold it yesterday at 1.92 before that last red day on the chart which is today's action. This exit looks about perfect right now because yesterday IFON only hit a high of 1.96. And right now it is looking like that was the end.

It very well could get a push over $2 but there is just something about those round numbers. Notice it never traded at $2. And I noticed that the buying has been coming every day and that had to end eventually. Drew that with a black circle. I was also thinking about the valuation. No longer in net-net territory here and not the kind of net-net I know well enough to run past that valuation. A buy right around $1 off that pull-back would have been sweet in retrospect because the technicals were there for it to be had but I'm happy with this trade. I had a loss today chasing a momo penny stock so this is offsetting the loss.