Oil Technical Analysis: Like Taking Candy From A Baby

I was actually going to post this a day ago the night before the beating it took yesterday. Sorry about that. Anyway, I actually missed the trade because I wasn't watching oil.

The first circle on the left is a somewhat weak shooting star candle. Just means sellers were particularly strong by the end of the day. Buyers were not in control. The significance was it was at the peak of price resistance. Next circle. Big doji right at resistance. Very bearish. The doji means there was a battle between buyers and sellers and it reflects major indecision in the marketplace. When a doji occurs at the extreme end of a trend it often indicates a reversal in trend. I noticed going back a lot of months a doji was a good signal of an earlier trend change to. Both of these clues taken together leads the chart to read more downside. It definitely happened after that doji. Yesterday was a huge drop. That day isn't on this chart but USL closed at 35.50. I think oil finished at 62 a barrel.

Also, if you are going to go long on oil for a longer term trade from what I understand USL tracks better than USO because of the way they rollover the contracts. 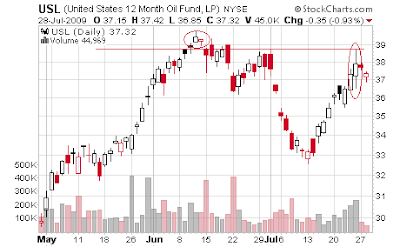