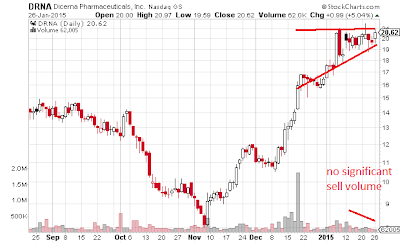 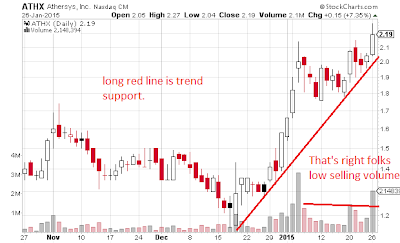 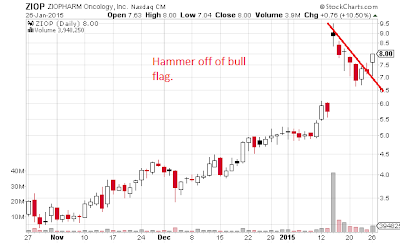 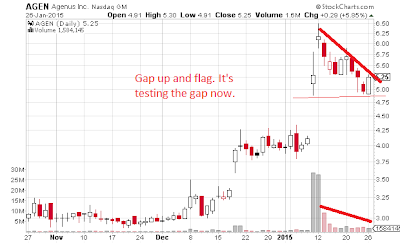 Bottom Up and Top Down Stocks

I went through some scans I typically go through and thought I'd post some that caught my eye. The first one bottom up is Sucampo Pharmaceuticals SCMP.  The chart was cool because it just broke out of consolidation on very strong volume. It's also at a 5 year high. I looked at it some more and this is just under a $700 million dollar company with a diverse portfolio of pharmaceuticals it sells. The good thing I see here is the earnings revisions. Next quarters earnings estimate is $.11 up from $.05 90 days ago. The current years estimate is $.47 a share up from $.22 ninety days ago. Next years EPS is currently $.60 up from $.40 ninety days ago. It's always great when earnings are revised up. With the stock at $15.66 this gives us a forward P/E multiple of 26. With earnings growing about the same rate the stock is conservatively fairly valued. However, the next 5 years are expected to grow more giving the stock a mere .35 PEG multiple(price to earnings growth). Lots of bullish stuff going on here.
﻿


I found this coffee company called Coffee Holding Company ticker JVA. It is a small company with a mere $34 million dollar market cap. Coffee companies are usually good businesses especially if you are selling beans wholesale, which they are. They are profitable and I see no reason the stock should trade around net tangible asset value. Roughly $20 million is net tangible asset value and the market cap is just above it at $34. It's around technical support and just had a wide ranging day up 7%.


The top down one is oil. I think it is a good time to start scaling into crude oil long. Everybody knows the ETF USO. USO is a terrible way to invest in oil. It's because of the way it rolls the contracts. It has to turnover futures contracts thus resulting in a lot of decay. The futures themselves CL is ideally the best way to trade oil. There are better ETF's like 12 month Oil ETF USL . USL holds longer term contracts and thus more closely resembles the actual price of oil. I'm long some USL now. Full Disclosure: long USL