Friday I had EXEL along with a bunch of other stocks on my watchlist. EXEL was a bull flag continuation breakout setup. 2.99 was the high of the previous run day and was the resistance level I was looking for a break of to get long. It came and printed 3.00 on decent volume. So I got long and filled at 3.00. EXEL immediately failed to hold that 3.00 and fell off the highs and slowly declined. I'm thinking it is just consolidating and the uptrend over 3.00 will start any time soon. The market makers were pretty crafty on EXEL Friday and the 3.00 was the failed breakout. I finally realized I am probably wrong on the breakout today and cut my loss at 2.88. I actually put the order in trying to get 2.91 but with the market order I got a lesser fill. When a stock is moving fast I will always use a market order especially on the entry. I would rather catch a big run with a less than favorable fill than miss the whole damn thing with a limit order. It was not a superior setup to take from the beginning because based on its past runs 3.15 - 3.20 would be the most it would go anytime soon. The risk reward wasn't really there. I also waited a bit to long to cut the loss after the 3.00 didn't hold. I think based on the setups risk reward the position was a bit oversized for me. This one is looking like a good short candidate since the 3.00 breakout failed. I put up a new post on the 27th about the direction of the USD. 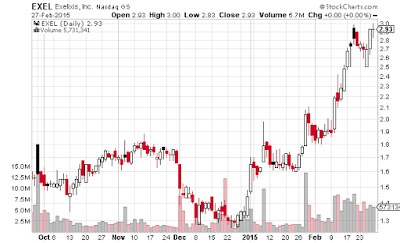