We all knew Netflix NFLX was overvalued with a PE multiple of a whopping 200. It's been taking a beating in the recent downturn. I'd like to propose Under Armour UA as overvalued. It's a great company and leader in its industry just like Netflix but the valuation is still to rich. Under Armour currently trades at 88 times earnings. It also trades for 6 times sales. Earnings are expected to grow roughly 24% a year going forward. With a PE of 88 and at 6 times sales perfection is "baked in" to the companies future performance. There is a lot of market cap that could quickly get trimmed on a bad quarter or future guidance. Or how about a market correction! This looks like a correction and an industry leader like Under Armour could get sold off like a Netflix or Apple. I see it happening here in the charts. Let's look at a 6 month chart of Under Armour below. 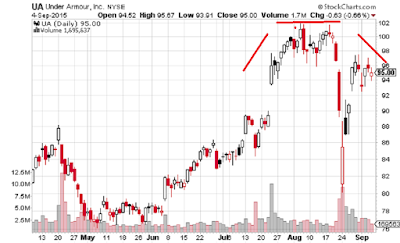 See the red line that is forming a round top? A rounding top is a bearish top formation. Some people call it a head and shoulders. Under Armour is a high beta stock and this chart is essentially mimicking the major indices. So yeah we are very close to confirmation of a top in the market. What is does after the pennant bear flag below is key. It looks to me that with the shooting star candles on UA we are going lower next. I am short some Under Armour at 94.52. I successfully shorted Netflix the other day at 116 and covered at 110. I cataloged that trade on my trading blog . 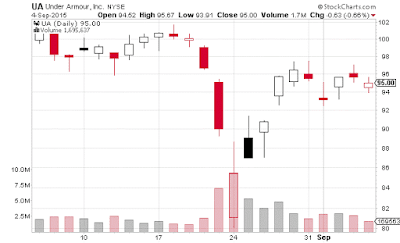