This isn't my watchlist. These are just some charts that I thought were pretty neat and wanted to make an example of. I guess this post is like a diary of charts.

Anyway, AXL traded really well last week. I think this one came in my scans in the low $1's. That was when I put it in my watchlist and posted that watchlist on Twitter on July 16th . Before the big run. Yes, stocks like this fell into my lap in my scans the weekend before the market psycho bull run. I bet you remember that week. What a week. Even though they were in my lap that week I would give myself a D+ on trading them. I didn't make enough trades in them. I also only caught about 16% profit on AXL when there was an easy 50%+ to be had as you can see from this chart. 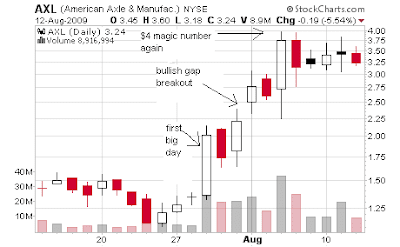 AXL ran about 50% if I remember correctly on the first big push day on volume. Funny enough that last huge day it had the stock maxed out again at 50%. Pattern? I'd say yeah. But the better pattern is the way it trades. It runs then consolidates the next day. You can see it in the red candles that represent a negative finish for the day. That 50% was pretty cool but the better indicator was when it topped out at $3.98ish for the second day in a row. I think one of those days was actually $3.99 if I remember correctly. The round number $4.00 was a significant resistance level for the stock. Round numbers and .50 marks on stocks under about $3 are psychological levels and even more importantly important to program trades I feel. Half the volume on the exchanges is computers. I learned the round number edge from another trader almost a year ago. If you were holding the stock long after the shooting star/gravestone candle on the 3 or 5 minute at below $4 you better have been concerned. I was just watching though because I had already taken a profit days earlier and was afraid to chase. 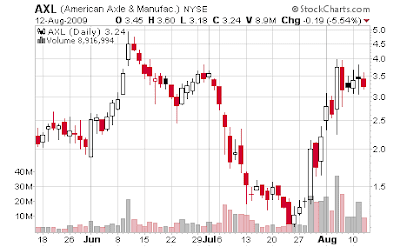 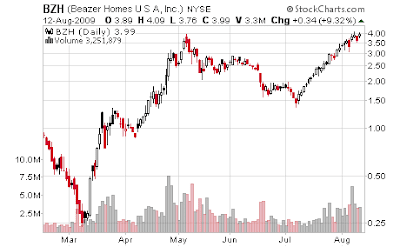 Beazer BZH again. Almost an amazing thing to see in a big board stock. Day after day of a rise with few red days. Almost has the look of manipulation. 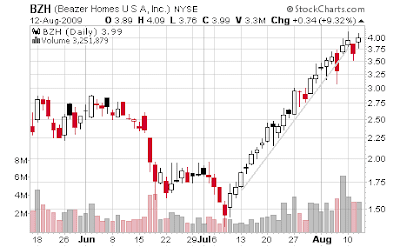 You can see on these you just wait for a pull-back to trend line then you buy when it's on the trend line support. You sell your gain. Repeat. This stuff happens all the time. 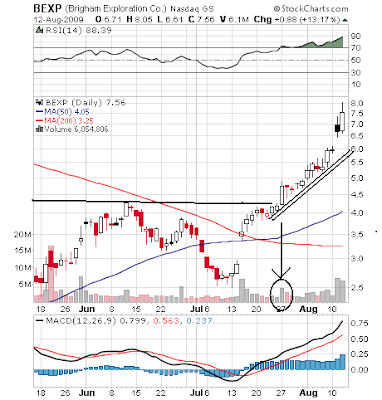 Nice failed signal on PACR when it broke trend line support and still held. Wish I had notice this earlier. Maybe still good on pull-back. 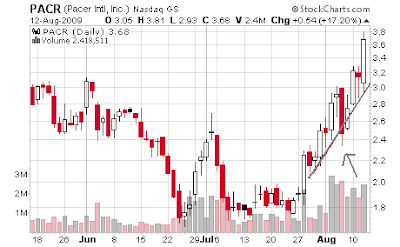