My technical bull call from about a month or so ago on the major indices has been right on. Around Dow Jones 9,500 was some key resistance. Dow Jones 10,000 would take out some good resistance levels and about be confirmation of a technical bottom. It looks like this is going to be a struggle with these fairly valued valuations. I had no idea what the fundamentals and economics was going to look like a month ago or even four months ago. Fundamentals and valuations are powerful I feel and know to. It's a fact technicals can only go so far. Economic reality is a powerful slap in the face.

In that last link you can see how the overall stock market started breaking down technically when valuations were at historic levels in the tech bubble nine years ago. People were blinded by the "new age" of technology and valued stocks as if they could grow profits beyond the possible. Once the technicals matched the fundamental picture that was the time to take profits and get short.

If the economic data stays about the same going into the fourth quarter 2009 and 2010 and GDP adjusted for stimulus stays pretty crappy its an easy short in my opinion on overall fundys.


This is not just another little recession. The economy is not going to blast to new heights any time soon. Forward valuations look more like a regular old recession is about to end I feel. The consumer is different now. The consumer is saving more now and deleveraging the last 15-20 years of insanity. This could take some time I believe.

I think these valuations are getting to optimistic and we are about fairly valued here. There is the possibility that the run continues hoping for a big, real change and in that case I feel that 12,000 on Dow and 1,300 S&P are the easiest levels to get short on a solid technical signal. I'm still watching for a signal here for a short. A major wide ranging day where we see a 3-4% plunge would be a good signal. There isn't a spike top here like we had on the last tops over the last year. This action the past day is not looking like a major signal. A spike/wide ranging drop day and a gap down should be good technical analysis indicators going forward. Feel free anybody to comment on the economy and valuations and disagree with me. I like hearing all sides to things and I won't bite. 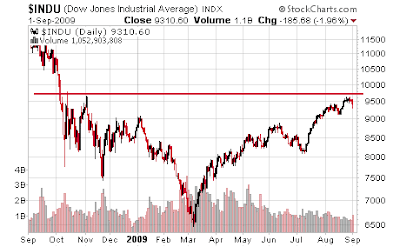 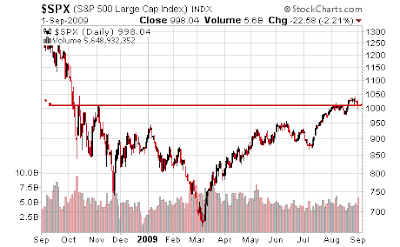